On friday my beloved iBook didn't wake up when I opened it. Instead the hard disk made sounds like rtrtrt...rtrtrt...rtrtrt...rtrtrt... Powercycling didn't help, so I decided to replace the harddisk. This sounds easier than it is, because you have to disassemble an iBook to get to the harddrive buried deep inside the "guts". And iBooks are not made for easy disassembly!

I had some experience with opening an iBook before, and I still remembered how it took a load off my mind when this little cutie booted again.

Anticipating the worst I checked the prices for the new Apple MacBook. Well, if I failed to repair my iBook I had to pay roughly 1400 € for a new one. Certainly too much for my taste!

Atelco in Raisdorf only had a 60 GB notebook drive, so I bought it although it meant downgrading from my 80 GB drive. To make a backup of the old drive I also bought an USB 2.0 to IDE and SATA adapter.

Following this excellent guide I went to the next hardware store and bought a Torx T8 and a Philips #0 screwdriver. At home we have tons and tons of different screwdrivers, but most small ones are ultra-cheap crap. I mean, why do people produce, sell and even buy this stuff? They usually "screw up" on their first or second screw...

These are the tools I used: 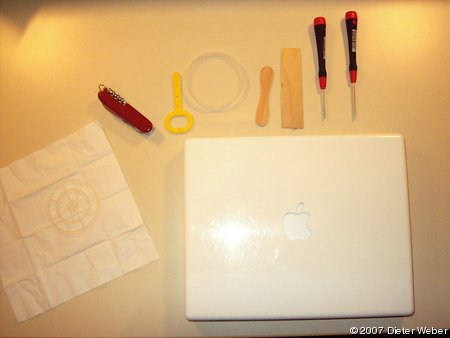 The hardest part is to remove the plastic shell, because you have to release a few notches and you might easily break something. I used the wooden tools you can see on the picture above for that; it worked quite well. On the next picture you can see the almost disassembled iBook: 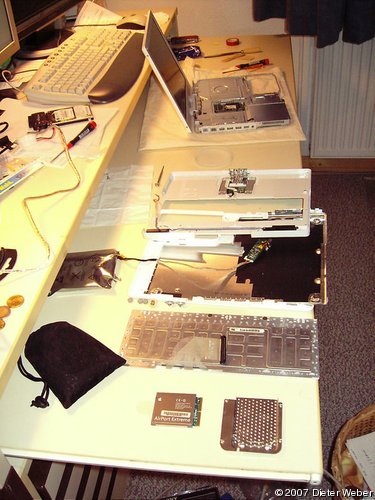 Fortunately I managed to back up the data on the broken hard disk (although there is almost nothing important on it), but the drive is really broken, it paused during backup again and again, making the rtrtrt...rtrtrt noises. The new one works smoothely, I already installed OS X again and decided not to use the backup except of a few precious files like the browser's bookmarks. I had too much old stuff on the iBook anyway. Now I hope that the next time my iBook gets broken I have significantly more money so I can buy such a nice dual-core MacBook or MacBook Pro...

This actually works - try the online demo! The hack exploits that browsers assign different CSS properties to a link depending on if it's visited or not. This example assigns different colors to visited and unvisited sites via CSS and then reads the color with JavaScript. It's also possible to assign CSS properties to links so that an image is loaded or not depending on whether the link was visited or not. This even works without JavaScript.

Pay attention to the Schödinger equation in the background!

A story in German about fruit flies

I have started work on a new major release of PHPGallue (0.7 series) today. It will be rewritten more or less from scratch, although many concepts and maybe even code from the 0.3 release will remain.

The first tiny part is already done, the corner stone so to say: A framework for autoloading PHP source files in large projects with lots of files and classes distributed among several independent sub-projects (like PHPGallue...). This is probably also useful for other PHP programmers, maybe I can do some advertising...

The next step will be a debugging and tracing infrastructure; PHPGallue should get a database-driven debugging and messaging backend so that debugging a whole cluster is easier. I will start with an abstract definition and a very simple implementation so that the cluster debugging system can be plugged in later.

I18n and l10n infrastructure will be the following step, I'm not quite sure yet how to organize this.

The new release comes with a Makefile for building documentation and other stuff that can be generated automatically. Building doumentation was a bit difficult before. The code hasn't got an explicit license yet, but I plan to release it under LGPL and GPL like before. I don't know if it's a problem to release the documentation under GPL or LGPL, maybe I have to release the whole stuff under GFDL or Creative Commons Attribution-Share Alike, too.

Yesterday I realized that we do not depend on Closed Source software any more, at least not on personal computers. Almost everything can be achieved with Open Source tools. They have reached such a high level and professional attitude that they are not cheap replacements of Closed Source software, but provide innovative and independent solutions which are often better than Closed Source alternatives.

What astonishes me a bit is that lots of Open Source projects are actually commercial software (for example MySQL), and more and more companies see the benefits of releasing their software's sources to the public. For me it seems as if this has become a big trend in the last years. Good for everybody, basically!

This came to my mind when I had to set up ActivePerl on WinXP for my sister in order to run a little script. I had to change some bits—why the heck does Windows use CRLF instead of LF like everyone else? Notepad cannot handle files with LF line endings, so I needed a text editor. The Wikipedia article "List of text editors" offered a whole bunch of Open Source editors, I chose Notepad++ because I already had heard something about it ;-). I realized that any of these Open Source editors by far outperforms the default text editor of Windows XP.

Well, I pretty much like VMware, but lately VirtualBox was made Open Source which seems to provide pretty much the same functionality. Other solutions such as XEN are able to virtualize most x86 operating systems on CPUs with Intel's VT and AMD's Pacifica, and others are developing quickly. The prices for virtualisation technologies are plunging, VMware and other vendors give away some of their products for free, probably because they want to get a bigger share of the quickly growing virtualisation market.

The Acrobat Reader is for me just the best PDF reader under Linux, with kpdf there's already an alternative for ordinary PDFs, but without gimmicks like embedded 3D models.

OS X is just the best operating system for my iBook, it would also run under Linux, with a few drawbacks concerning usability. I am not talking about Windows XP here, the only reason why it's installed on some machines here is because sometimes you want to use Word or Access, test Web pages with IE 7 and (sometimes) use strange hardware. In fact, every time I touch Windows I realize again how much it sucks with respect to usability. News about releases of truly innovative products from Microsoft were rare in the last years, the IE 7, for example, just tries to catch up with browsers such as Opera, Safari, Firefox, Konqueror, ... Any of them could replace IE 7 for me and the latter two are Open Source.

Well, Skype is just a neat tool for free video telephony, but for example Ekiga can do the same. Maybe not as easy as Skype, but instead free like free spech, not only free like free beer.

The nVidia Closed Source driver for 3D video cards is truly without alternative if you want to have accelerated 3D, two monitors and TV out on your nVidia card, but only because nVidia won't supply the hardware specs, not because there would be no one to write the driver.

The only really unmatched product for me is Mathematica. I didn't find an Open Souce project that provides symbolic and numerical calculus and data handling like Mathematica.

Well, that's all I can think of at the moment. How is it for you? Are there any software products unmatched by an Open Source solution? Many people say that there's for example no alternative for them to Adobe Photoshop.

Some random text by uellue.